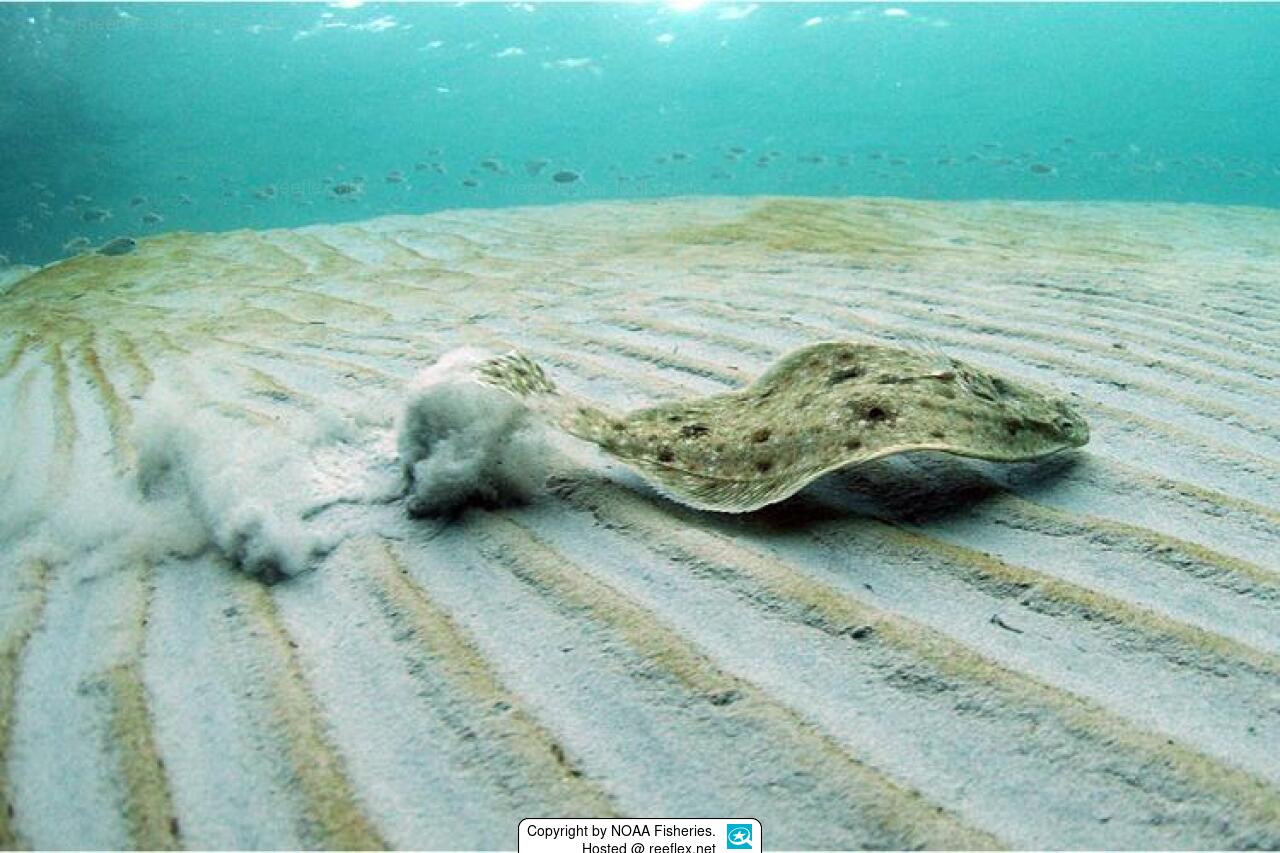 
Courtesy of the author NOAA Fisheries

Related species at
Catalog of Life:

The Yellowtail flounder Limanda ferruginea occurs along the Atlantic coast of North America from Newfoundland to the Chesapeake Bay, with 3 populations in U.S. waters, in the Gulf of Maine/Cape Cod, Georges Bank, and southern New England/Mid-Atlantic.

The yellowtail flounder is a thin-skinned, right-eyed flounder, it is nearly half as wide as it is long and has an oval body.
Its upper side, including the fins, is brownish or olive, red in color with large, irregular rust-colored spots; true to its name, its caudal fin and the edges of its two long fins are yellowish.
The underside of the body is white, except for the caudal peduncle (the area between the body and the tail), which is yellowish.
The flounder has a small mouth and a curved lateral line.

Biology:
Yellowtail flounder grow faster than most flatfish and can live up to 17 years, although most actually live no more than 7 years.
Limanda ferruginea also becomes sexually mature earlier than most flatfish.
Almost all females are able to reproduce when they are 3 years old, and the animals spawn in the spring and summer.
Females lay their eggs on the sea floor, after fertilization they rise to the surface and the larvae float in the surface water for about 2 months.
When yellowtail flounder first hatch, their eyes are symmetrical, with one eye on each side of the head.
As the fish grows, it flattens and the left eye slowly moves to the right side of the head.
After this metamorphosis, the juvenile settles to the sea floor.
Diet: Juvenile flounder eat mainly worms, while adults feed on crustaceans and worms.

Predators: Smut sharks, rays and a variety of fish such as cod, hake, other flounders and anglerfishs eat the yellowtail flounder.

In addition, yellowtail flounder is a coveted and very tasty prey of recreational anglers, but it is also heavily targeted by commercial fisheries.

0 husbandary tips from our users available
Show all and discuss